Normally the docker tool uploads/downloads docker images from docker public registry called Docker Hub. Docker hub lets us upload our images free of cost and anybody can access our images as our images our public. There are ways to configure our own registries from where we can pull docker images.
The benefits of having private registries are:
Setting up a private registry is very simple in Ubuntu. We can download the registry container image from the Docker Hub and use that image to start our own Docker registry service.
In this document I am going to write about a very basic registry on Ubuntu 14.04 without any built-in authentication mechanism and without SSL.
I will take two docker nodes server1(IP 192.168.10.75) and server2(192.168.10.76), in the first node server1 I will deploy the docker registry container and from the second node server2, I am going to pull images from our own registry.
Now lets do the handson.
Download the registry image from docker hub.
docker pull registry:latest

Let’s run the registry docker container, the registry container exposes port 5000 on the node server1, so that docker clients outside the container can use it.
docker run --name myregistry -p 5000:5000 -d registry:latest

We can check the images available in our registry by running the command:
curl <repository>:<port>/v2/_catalog
curl localhost:5000/v2/_catalog

Congrats! We have configured our own registry and pushed/pulled images from it successfully

Creating a docker image from a running container

) .
I will give one example, I will deploy the world’s simplest node.js application in a docker container. I will take lightweight Alpine Linux as base image for my Node.JS application image.
First I will pull the Alpine Linux image from docker hub.
# docker pull alpine 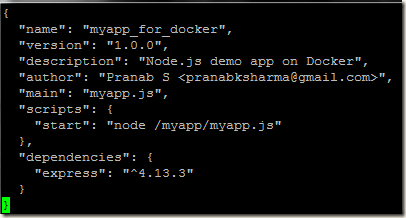 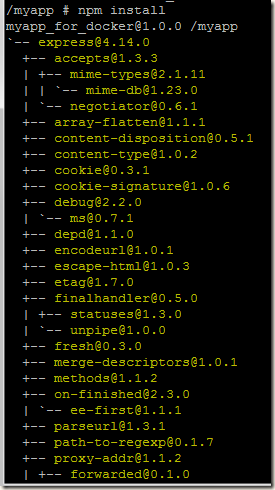 Our new image is created and if we run the docker images command, we can see the newly created image.

Checking our Node.js app from browser:

Posted by Pranab Sharma at 13:06 No comments:

How to run MySQL docker container with populated data

Let’s inspect whether the databases got created in our containers.
First connect to mysql-techsupport container and check: 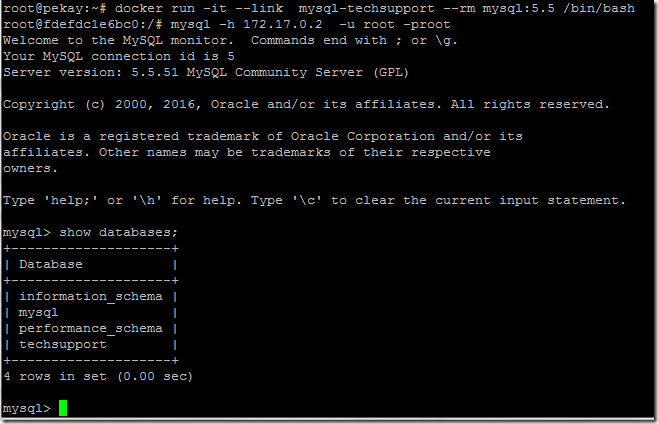 Yes from the screenshot we can see that techsupport database got created. 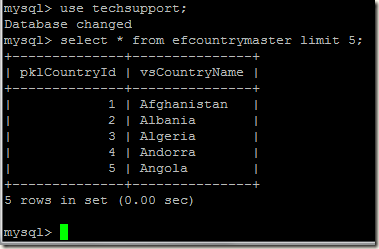 Data is also present, so our MySQL container is populated with the required data 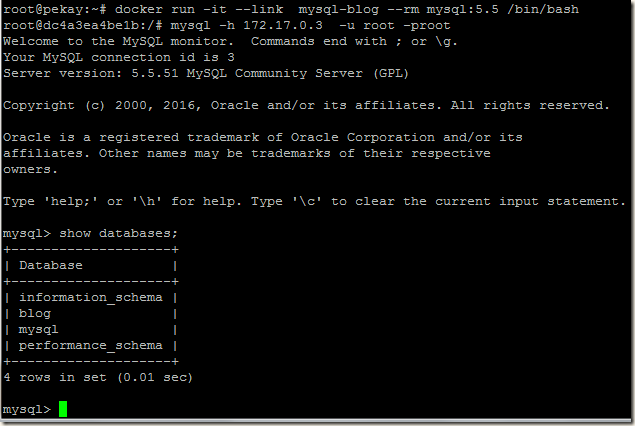 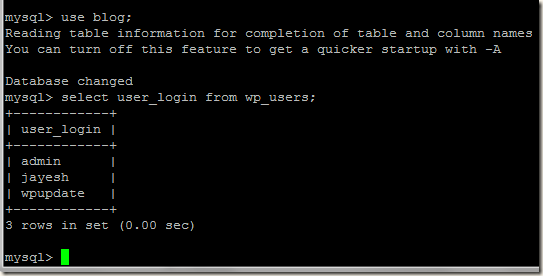 Note: In the above screenshot, I have connected to the MySQL server using the IP address (mysql -h 172.17.0.3  -u root -proot). To get the IP address we can run env or we can use the environment variable MYSQL_BLOG_PORT_3306_TCP_ADDR instead of IP address. 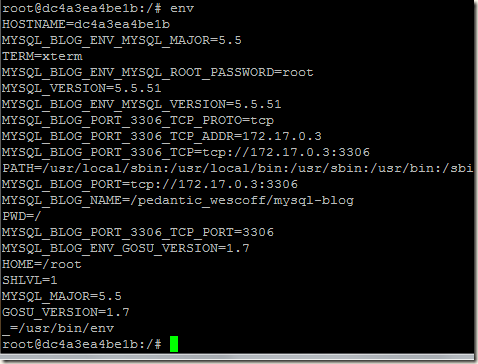 One of my MongoDB dev database server had crashed due to abrupt power failure. I was running MongoDB 3.2.4 with WiredTiger storage engine. I had one user collection in my test database; and at the time of server crash, inserts were going on from a loop into this collection.
I started back the server; MongoDB did recovery from last checkpoint and it started fine.
2016-06-24T09:53:47.113+0530 W - [initandlisten] Detected unclean shutdown - /data/db/mongod.lock is not empty.
2016-06-24T09:53:47.113+0530 W STORAGE [initandlisten] Recovering data from the last clean checkpoint.
After the server had started, I tried to check the number of documents that got inserted into my users collection, so I run the db.collection.count() and seeing the result I was stunned.
> db.users.count()
7
> db.users.find({}).count()
7

Then I run db.collection.stats() that too also confirmed the previous results 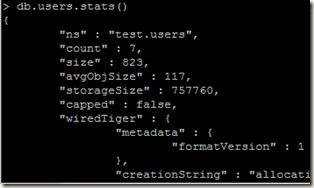 This result was not correct, as previously I had 7 documents in the users collections (before the insert operation was started). At the time of crash as the insert operations were going on, so the number documents should have increased. So where the document from my new inserts had gone????? Immediately I felt the fear of data loss or corruption.
I run aggregate method with $group to check the number of docs and result was encouraging:
> db.users.aggregate({ $group: { _id: null, count: { $sum: 1 } } })
{ "_id" : null, "count" : 27662 }

My data was there, so the fear of data loss went away

. That means the issue was with the count() and stats() results.
Then I checked the MongoDB documents and I found that, if the MongoDB instance using WiredTiger storage engine had unclean shutdown, then the statistics on size and count may go wrong.
To restore and correct the statistics after an unclean shutdown, we should run the validate command or the helper method db.collection.validate() on each collection of the mongod.
Then I run the db.collection.validate() method on my users collections:

Posted by Pranab Sharma at 16:50 No comments:

Email ThisBlogThis!Share to TwitterShare to FacebookShare to Pinterest
Labels: MongoDB

JOIN in MongoDB ? or JOIN’s kin? or something similar?

One of the sought after features in MongoDB was to have the ability to join collections. People working on RDBMS were very much familiar with joins and could not even imagine working without joins. The base of RDBMS is the relations, and join is one of the success factors of RDBMS. Also the join is the one of the major performance issues in RDBMS when we have large amount of data. MongoDB is based on document model, most of the time all the data for a record is located in a single document. So if the data is properly modelled in MongoDB the need for Joins can be avoided. For some requirements like reporting, analytics etc. it is possible that the data we need may reside in multiple collections. As MongoDB user base is growing and more and more users from RDBMS world are using MongoDB, so requirement of Join came out strongly. Starting with MongoDB version 3.2, one new aggregation framework operator $lookup was added. The $lookup operator performs an operation similar to a Join (left outer join). We can read data from one collection and merge the data with data from another collection. Prior to MongoDB 3.2, similar work had to be implemented in application code.
Let’s get our hands dirty with an example.
Suppose we have two collections:
users collection stores user’s information.

. So the link between these users and activity collection is the userID field.
Now suppose we got a requirement: “find username and city of the user performing each activity”. But the user’s detail information is stored in users collection, so we have to join the activity and users collections using the userID field to extract the required data.
It’s the time to leverage the power of $lookup operator. So our aggregation query will be:
> db.activity.aggregate(
{
"$lookup": {
from : "users",
localField : "userID",
foreignField: "userID",
as : "userInfo" }
}) 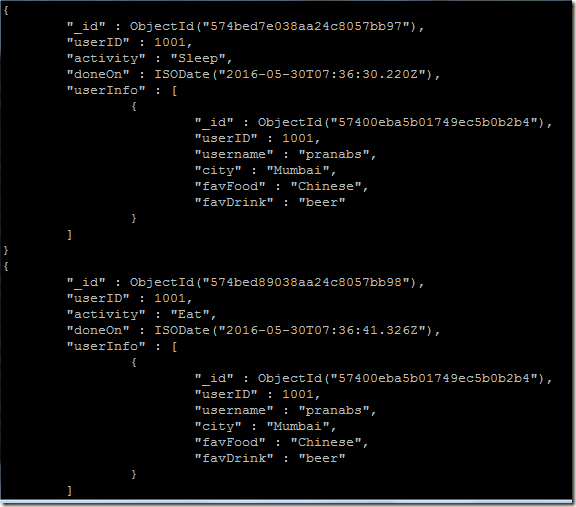 From above output, we can see that the whole users document is stored within the userInfo array.
The data returned above is not looking cool, this is not the format in which we wanted the data. If we get data in the following format, it would be nice:
UserID, Activity, UserName, City
So for that we have to use two more aggregation framework operators, $unwind and $project, let’s rewrite our aggregation query:
> db.activity.aggregate(
{
"$lookup": {
from : "users",
localField : "userID",
foreignField: "userID",
as : "userInfo" }
},
{
"$unwind": "$userInfo"
},
{
"$project": {
"UserID":"$userID",
"UserName" : "$userInfo.username",
"City" : "$userInfo.city",
"activity" : 1,
"_id": 0 }
}
) 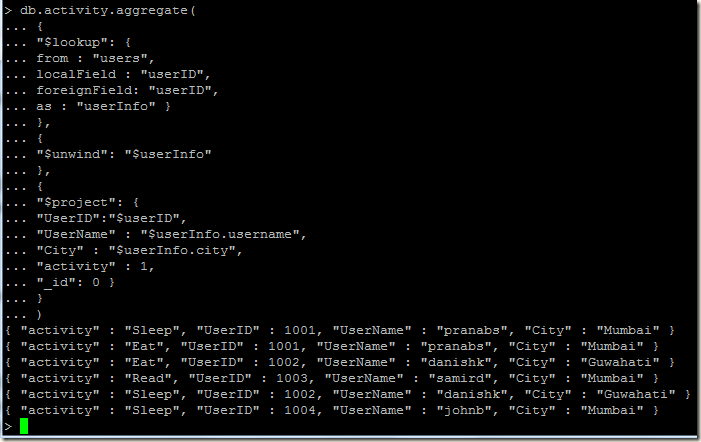 Posted by Pranab Sharma at 17:12 No comments: